New aza-BODIPY fluorophores disclosed are water-soluble, and specifically emit in the optical window ranging from 1000 to 1700 nm, whether they are alone, encapsulated or coupled to any molecule of interest (as an antibody or a biological ligand) or cell of interest (as a macrophage or a stem cell). Furthermore, preliminary assays on mice reported no toxicity of the compounds (Godard 2020).

This technology is being matured at SATT Linksium in order to:

The project is currently under maturation process at SATT Linksium

Medical imaging plays a critical role in cancer diagnosis but also in the improvement of the speed and accuracy of tumor resection during surgery. As traditional imaging modalities suffer from several constraints such as disruption of the surgical workflow, optical imaging methods have received tremendous interests for use in real-time image-guided surgery. Among them, second near-infrared wavelength window (NIR-II or SWIR, 1000-1700 nm) fluorescent imaging can probe tissue at centimetre depths and achieve micrometre-scale resolution at depths of millimetre. Unfortunately, few clinically suited NIR-II dyes are available so far that would permit the translation of NIR II fluorescence guided surgery to clinical practice.

Researchers at the Institute for Advances Biosciences (Grenoble Alpes University, CNRS, France) and ICMUB (University of Burgundy, Dijon, France) have developed innovative organic contrast agents capable of emitting in the NIR-II detection wavelength range. These fluorescent molecules are aza-BODIPY derivatives, which display both optical and biocompatible features (including correct persistence and excretion criteria as well as potentially no adverse effects) enabling their use for in vivo imaging and guided surgery. 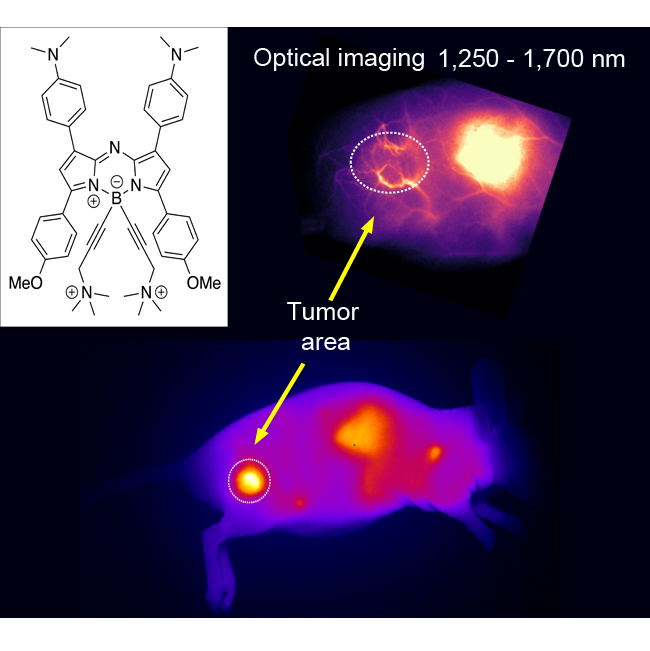 Several NIR fluorescence imaging systems are now available for pre-clinical and clinical studies which provide the surgeon with a guiding signal otherwise invisible. Systems and dyes (eg indocyanine green, ICG) are even approved by health governmental agencies (eg FDA, EMA) for use in humans. NIR II spectral range imaging has a deeper penetration depth, higher resolution and weak auto-fluorescence over NIR I; which is highly suitable for biomedical imaging. If optical systems and sensor for NIR-II imaging are becoming more performant and may enter soon the operating room there is a lack of dyes with peak emission in the NIR II/SWIR that would display all the suitable criteria for clinical use in humans. Indeed, ICG is fastly excreted which is limiting its clinical use.

New aza-BODIPY fluorophores can be used as contrast agent for fundamental scientific research and clinical applications: